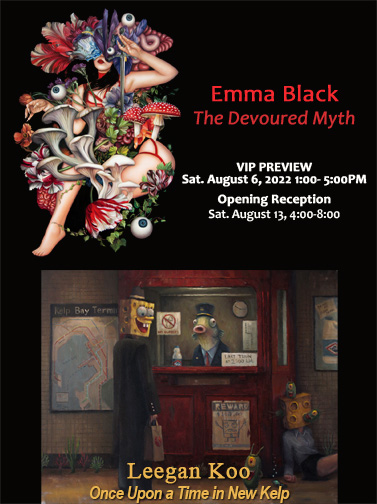 Leegan Koo's 'Once Upon A Time in New Kelp' opens August 13, 2022 with an opening reception at Copro Gallery. This series features different places and happenings in a newly imagined New Kelp City, which is the underwater metropolis from SpongeBob SquarePants. Growing up in big cities, I’ve always been fascinated by cityscapes and wanted to create my own city. Since my artworks often include SpongeBob characters, I wanted to use the name “New Kelp” but create a city built upon my imagination and inspirations I got from the images of old New York City and Seattle. For this series, I focused mainly on a sort of micro-society of the planktons that are like NYC’s rats to New Kelp City.

BIO - Leegan was born in Seoul, Korea. He began drawing and painting at a young age by himself. He grew up moving from one metropolitan city to another—Baltimore, Philadelphia, and New York City to name a few—and cultural diversity and experience of dynamic urban life became the major source of his artistic inspiration, along with jazz, hip-hop, and graffiti. In 2011, Leegan began to focus on painting cityscapes—a visual manifestation of memories and emotions attached to certain places—and experimented with various styles of realism and surrealism. In 2013, he moved to San Francisco to attend the Academy of Art University where he received his first formal art education. In 2014, Leegan moved to Los Angeles and began his career as a freelance artist while working part-time for art companies that specialize in producing and printing artworks for clients such as Crate and Barrel, Pottery Barn, and Z Gallery. He currently lives and works as a freelance artist in Bellingham WA 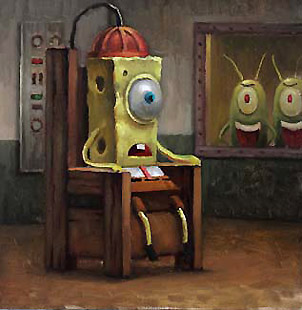 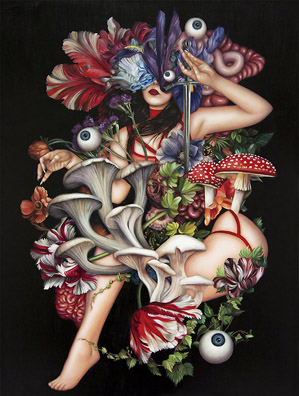 Emma Black 'The Devoured Myth' is Emma's first solo exhibition with Copro Gallery, The Devoured Myth is a series about loss and change, bringing together a collection of portraits and personal memories. Present in the works is a contemplation of death and mortality, and an exploration of the relationship between new understandings and perceived identity. Caught between life and death in an essential unreality, the figures in the paintings are in turmoil as they transform into new beings. The visible anatomy acts as a representation of, and simultaneous contortion, of the idea of true beauty being on the inside; contrasting with the unassuming pleasantness of the flora and fauna blooming on the surface. The inaccuracies of their existence become intertwined into their identities, resulting in a hybrid of entities that aims to feels more akin to an object, in a process of self examination and objectification. Acting upon a sense of what could have been and the unlikely feelings of a new beginning, they serve as a tribute to the personal loss and grief of the world.

Artist Statement: Emma Black is a UK based artist. She graduated in 2012 from the University of Westminster with a First Class honours degree in Illustration, and in 2016 from the Cambridge School of Art with a MA in Fine Art. The unknown, whether an aspect of the physical world or a limitation of the human mind, is the main starting point for her work. Using traditional media and autobiographical themes, her practice explores notions of The Uncanny, human subconscious and our relationship to death and the natural world.

During the planning and development of the series I experienced several forms of personal tragedy; sickness and hospital treatments for family members, the end of my 12 year relationship with my partner, and the sudden death of my father. The pieces were created alongside these events and are a reflection of dealing with these changes, and a processing of an altered identity in the face of multiple endings. 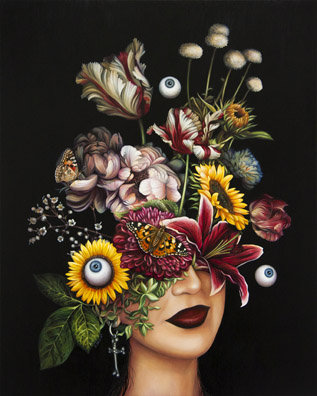