Constructed without limbs Oscar was a surly child. He riled against the world feeling sidelined in his inability
to do just about anything. His parents offered to purchase appendages for him, but he adamantly remained in
his self imposed funk. His bitterness grew and festered for many years until one day he had an awakening. A
calling,a purpose, a vocation beckoned. He would become a critic! 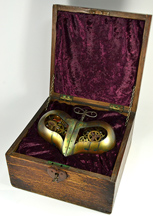