Rob Sato's watercolors layer personal, historical, and imaginary narratives into scenes of perpetual transition. In his work the past, present and future exist simultaneously. Says Rob "Time is on the loose in these pictures, and I've been enjoying thinking of it as a living, invisible mass that is fed and mutated by human energy and perception. The subjects are caught between shifting dimensions, living in a storm of birth, decay, death and transformation. Time moves around, against and through them." Rob's work has been featured in Giant Robot, Hi Fructose, Juxtapoz and New American Paintings.

Kris Chau says."My drawings and paintings tend to lend themselves to being pretty which is something I can't help. So to balance that out, I want the viewer to understand that it is not all serious and in order for things to be good, there needs to be a balance of salty and sweet."
(from interview on Paper Darts) 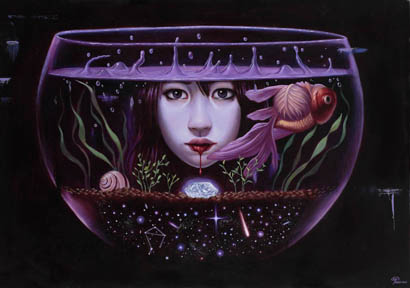 Peter Chan's "Soliloquy" will be Peter's first solo show and first exhibit in Los Angeles! Born in Hong Kong and raised in Toronto,Canada Peter has created a series of works collectively entitled Soliloquy, a fitting title considering the introspective contemplations he had while producing these paintings (see statement below). His new body of work will include oil paintings, drawings and works on paper. Peter will be in attendance at the artist reception and will have a special opening release print available.

Soliloquy - Top 40 blares out the radio unheard, you're stuck in traffic on the 405 but it doesn't matter. Luke-warm water pelts your face, suds wash out of your eyes. It stings a bit. Ear buds dangle as you breathe in overgrown grass on your morning jog. Everything tunes out like TV static and you think. You're experiencing a freeze frame moment, an involuntary clarity of thought.

This happens for me when I'm alone in the studio. The clock tells me it's midnight again. My work is spread out around me as if I were playing a giant hand of poker against myself, the painted cabbages their own suit of cards. My mind ticks along with slower beats from the Beach Boys, a new addition to the playlist rotation. I loosely bleed cobalt violet onto my painting with a pallet knife - I've never done this before. Time stops. A wave of realization hits me. The toxic emotions I began my painting with are gone, replaced with the excitement of the ending chapter. I open the window to air out the oily fumes.

We've all experienced broken fragments of time where we reach inside ourselves and find a little cabbage - perhaps two, or even three sometimes. They're incredibly dense, filled with dark matter found between the stars, seemingly insurmountable. As long as we take it layer by layer, we can handle it. Before time resumes, we're patched to v2.0 !