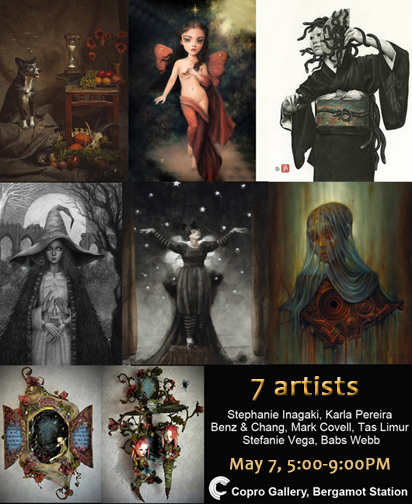 7 artists - May 7 - Copro Gallery presents a 7 artist exhibition with Stephanie Inagaki, Karla Pereira, Benz and Chang, Stefanie Vega, Babs Webb, Mark Covell, Tas Limur. Each artist goes thier own direction and presents a different theme for this Spring exhibition opening May 7 with an artist reception 5:00-9:00PM.. Many of the artists will be present.

STEPHANIE INAGAKI - The Hidden Realm is where creatures and magical beings reside in Japanese myth and folklore, where they can rest away from the human gaze. In my version of this visual narrative, it is a place of reflection, the unconscious, and the masks we put up, told through the lens of the anthropomorphic and creatures that are familiars.
This veil of the fantastical distills and reimagines how the self is communicated, how we wish we were in our dreams and fantasies. It reveals our inner truths or keeps a part of us hidden.

BIO: A Southern California native, Stephanie Inagaki received her Bachelor of Fine Arts from Boston University's College of Fine Arts and her Master of Fine Arts from the San Francisco Art Institute. After studying abroad in Italy and living in major cities around the United States, she has returned to her roots to establish herself as a multifaceted artist in Los Angeles.

KARLA PEREIRA - Copro Gallery presents artist Karla Pereira's 'The Beauty of the Soul'. Karla's new series reflects the beauty and power of the soul with women, being the main  characters of her paintings. They are depicted as independent, powerful, free and ready to face the adversities of the world. Each painting has a poem that goes along with it and for the first time Karla has included a sculpture in the exhibit. 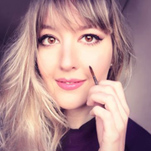 BIO: Karla Pereira is a pop surrealist painter based in Zaragoza (Spain). Since she was young she was intrigued with drawing, painting, singing, dance and all art in general however she never recieved any formal training. Her interest continued throughout the years and in 2012 she started studying towards a degree in History of Art, at the same time beginning to oil paint, self taught.
Her early work focused on an expressionist style like painters Edvard Munch and Jackson Pollock. After some time, inspired by the Blythe dolls, she started doing paintings that focus on female characters, whose appearance resembled Blythe. During the course of her career in History of Art, she discovered new styles and iconography that inspire her work, exerting a great influence from the Renaissance, Baroque and European portraiture periods from the eighteenth and nineteenth centuries.
#

BENZ AND CHANG believe that the arts make the world a better place through shared experience and mutual understanding. The Benz & Chang paintings are “fake vintage photos” rendered with watercolor and/or walnut ink. They are dreamlike and figurative. Most of the paintings appear to be photos from the early 20th century, and they reward a second or third look with details that can be easy to miss. Figures appear with twins, crowns, wings, ghost limbs, halos, odd lights and shadows. Using this imagery, Benz and Chang explore transformative life experiences such as facing fear, making life-changing decisions, grieving losses, having mystical experiences, or confronting mortality. Says Benz, “I see myself as a channel. My job is to align myself with a larger creative impulse, and also with the painting itself. I must add that I rarely do this perfectly. During the various steps of making a painting, I will “see” something that belongs in the painting, and so I will add it. If the decision-making process breaks down, I consult a Magic 8-Ball for direction. The resulting paintings are dreamlike.”

BIO: - Benz began having experiences with spirits and hauntings at an early age. These experiences have continued throughout his life. They have fueled his interest in dreams, ghosts, and clairvoyance from all angles, including the fictional, real, fraudulent, or imagined. Benz grew up in the American Southwest, and now enjoys living in the (haunted) Pacific Northwest. He has an extensive collection of odd photos from the early 20th century. Benz has a Bachelor of Fine Arts degree from the University of Colorado in Boulder.
Chang is a fictional photography studio partner to Benz. He is a stuffed cat of the stuffed animal variety (not the taxidermy variety). Chang supplies the dark.

MARK COVELL latest work, done for Copro Gallery, focuses on bringing his bizarre robotic visions to life. Mark has the attitude that shiny new mechanics have no story to tell until they’ve tarnished over time. He has been creating a haunted world where the abandoned factory and empty shell of machines becomes an eerie thing of beauty.

BIO - born in 1972 in Hartford, CT and drawing fanatically at the age of five. The young artist, fed on a healthy diet of comics, Star Wars and Frank Frazetta, immersed himself in the drawing and painting of these favorite subject matters. After graduating from Paier College of Art, Mark began illustrating children’s books. Since then, he has moved on to a successful career of concept art and storyboarding. Mark’s work has been featured in Playboy Magazine, DC comics, and can be seen regularly in Spectrum, the Best of Contemporary Fantastic Art.

STEFANIE VEGA - Creates 3 pieces each with a poem. The Musing, The House of Intention and Please Knock! It is my intention to jar the collective memory we have of imagery & symbolism through a crossbreeding of the unexpected. Place all your intentions, with no apprehensions, in my care, like some seeds to be grown...

Artist Statement - I hope to give new voice to an age-old doll tradition that insists on singing its own song. From the tales that left profound impressions in my earliest childhood memories, I began working not only with unwanted doll parts, but with skull & bones & birds. They spoke to me of wanting to tell the bigger story. The dolls we played with as children were the totems of our dreams. Upon them we laid our hopes & fears…upon them we projected our greatest selves. I was serenaded by haunting lullabies from long ago. So, drawing on an enormous pool of archetypes & folklore & developing characters based on children’s literature & faerie tales, a new hybrid was born. I began to write verse in order to share the tales that influenced the work. This rogue taxidermy with discarded porcelain doll parts and accompanying limerick became a cross-breeding of the unexpected & a departure from the familiar.”

BABS WEBB - Babs Webb is a Colorado-based dark fantasy artist with an affinity for the occult. Through strongly symbolic visuals, she strives to convey the visceral emotions that push the boundaries of our humanity; a shrewd clash of psychology and fantasy.

TAS LIMUR - My new series of fine art photography, "Indulgent Companions," is inspired by the paintings of the Renaissance period. I have always been fascinated by the way that artists from that era were able to capture the grace and beauty of their subjects. In my own work, I strive to create photographs that are similarly evocative. In this series, I focus on animals that are often considered to be "companion animals," such as dogs and cats. I wanted to capture them in a way that highlights their individual personalities and special relationships with their human companions. To do this, I focused on two key elements: food and table manners.

BIO - Tas Limur is a Los Angeles based photographer, born and raised in The People’s Republic of Bangladesh. Tas came into this world the son of a poetess and and an artiste. Tas says of his childhood: Growing up with so much art around me and having intellectual people over all the time helped my creative mind grow.”Tas believes that his work is a mirroring metaphor for the interconnected nature between light and darkness which resonates within human nature. Like fire and water, light and darkness are two sides of a single coin. The perceived duality of these two powerful forces manifest within the photographic action making of Tas’s work. Symbolic verifications that we are all in a constant flux of abstractions. As is apparent in his photographs, Tas likes existing within this polyphonic state of being. He hopes that you do to.
#