RYCA "ROUGH WITH THE SMOOTH" - BRITWEEK

WHAT: RYCA "ROUGH WITH THE SMOOTH" solo exhibition in conjunction with BRITWEEK 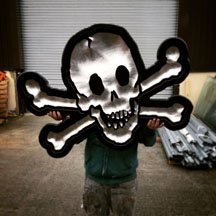 RYCA "ROUGH WITH THE SMOOTH"

Copro Gallery presents a solo exhibition by artist RYCA "Rough With The Smooth " This will be his first solo show with Copro and and unlike his recent previous exhibitions in Europe and Japan it fuses his Star Wars Iconography with lyrical subverted pub sign style works. For his L.A. debut he presents his most visually exciting exhibit to date and showing in the entire gallery. It will give viewers the opportunity to 'cross over' into 2 worlds

British Artist Ryan Callanan aka RYCA draws upon a broad spectrum of Contemporary popular culture in his works; referencing film, music and art history that is often seen as refreshingly comic and accessible.

With early influences including Andy Warhol and Roy Lichtenstein, Ryan would take classic Warhol imagery and replace its subject with Star Wars and other movie references in his works. The last few years has seen Ryan move towards a new practice that draws upon his in-­‐depth knowledge of materials and craftsmanship acquired through his training in industrial model making and 3-­‐D design, becoming what fellow Brit Artist Ben Eine calls a "chemist-­‐like" expert with materials and techniques.

With this highly disciplined art – form, Ryan started what was to continue to be a successful series of works in the visual style of the subverted pub sign, where he explored colloquial words and quotes. He created a series of signs of 'expletive-­‐ insertions' (a process by which an expletive or profanity is inserted into a word). These ingeniously witty works tap into the collective British psyche in which the pub sign has become an unconsciously absorbed reference point against which Ryan's words and symbols react. The pieces have continued to combine numerous techniques with glass, gilding, resin and lettering, and have captured the attention of celebrities such as Hollywood producer David Mandel and British personality Russell Brand who are now avid collectors of RYCA's works. Renowned international photographer JR commissioned RYCA to create a unique sign piece for his Paris based studio that reads "CA VA BIEN SE ASSER" / "Everything is going to be OK"

Most recently Ryan has been exploring song lyrics that are personally significant from his childhood and youth. The musical sources of his lyric works have been diverse and have included some classic 1990s hip hop, such as 'C.R.E.A.M.' [Cash Rules Everything Around Me] by New York group Wu-­‐Tang Clan, and 'Insane in the Brain' by American hip hop group Cypress Hill (from which the popular lyric 'Insane in the membrane' comes). The response to these highly original and poetic pieces has been incredible with music producers and writers buying up whole editions rejuvenating the dying art of sign writing. Ryan wants to really establish the aesthetic of what he calls 'old fashioned signage' as an art form to make it his own. "Nothing is truly original" he says, "but I don't know of anyone else doing this kind of work."