Monte Beauchamp is an awarding-winning art director whose books have been featured in Vanity Fair, The New York Times, The Onion, The Believer, Flaunt, Bizarre, Graphis, Print, and ForeWard magazine, among others. His titles include Krampus: The Devil of Christmas (Last Gasp), The Life and Times of R. Crumb (St. Martin’s Press), and Striking Images: Vintage Match Cover Art (Chronicle), New & Used BLAB! (Chronicle). He currently just finished a book for Simon & Schuster 'Masterful Marks Cartoonists Who Changed the World'

REVIEW OF THE FIRST BLAB! SHOW 2005 “In this climate of consumer pollution and corporate framework, it is no small feat when an act of creative freedom rears its pretty head. So when something comes along that is completely unrestrained and devoid of commercial influences it is time for applause. And BLAB! magazine is one of the platforms for unharnessed art that deserves a standing ovation. Started in 1986 and now in its 16th edition, BLAB! is the brainchild of founder, art director, and designer Monte Beauchamp. A magazine/art book in appearance, but without a strict editorial voice or advertising of any kind, it's more of an unconventional medium through which select artists have the freedom to create and express whatever they want across a chunk of pages. BLAB! started out heavy on comics but has expanded to include paintings and other works by countless outsider and fine artists. THE BLAB! SHOW, presented by Copro/Nason Gallery, features original artwork selections from the BLAB! anthologies, including pieces by Gary Baseman, Tim Biskup, Drew Friedman, David Sandlin, Owen Smith, Gary Taxali, Esther Pearl Watson, and more. It's the first group show for the magazine, and if the growth of this refreshing visual platform is any barometer, it won't be the last.”
—Juxtapoz, 2005 # 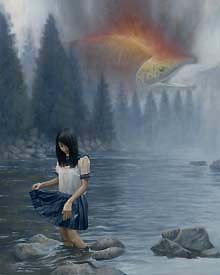 
In his second mini-solo exhibit for Copro Gallery Leegan K. presents a series of surreal paintings with a mysterious underlying theme. Says Leegan about the work "I think what’s more important than my message is what people feel when they see my art. I love to hear about their own interpretations and what kind of connection they draw between my art and their experiences of life".

Leegan began drawing and painting at a young age by himself. He grew up moving from one metropolitan city to another—Baltimore, Philadelphia, and New York City; and cultural diversity and experience of dynamic urban life became the major source of his artistic inspiration, along with jazz, hiphop, and graffiti. In 2011, Leegan began to focus on painting cityscapes—a visual manifestation of memories and emotions attached to certain places—and experimented with various styles of realism and surrealism. In 2013, he moved to San Francisco to attend Academy of Art University where he received his first formal art education. In 2014, Leegan moved to Los Angeles and joined Leftbank Art, a corporation that specializes in producing and printing artworks for clients such asCrate and Barrel, Pottery Barn, Z Gallery. He currently lives and works as a freelance artist and art instructor in Los Angeles.