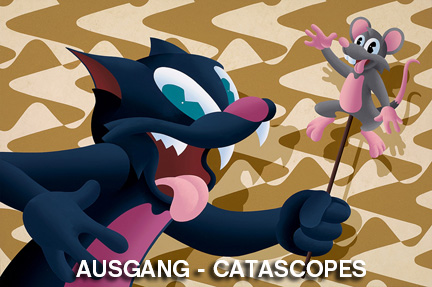 Copro Gallery presents a solo exhibition from Anthony Ausgang, "Catascopes". His trademark cat characters have become more than just day-trippers out on a Low Brow lark; they now appear to be hallucinations themselves. Ausgang takes his cats as close as possible to the cusp where they become unrecognizable and the narrative breaks down, making the artwork's story about the dissolution of it's own image. Yet there's still an attachment to reality that must be tended to, keeping it all in some kind of context; the viewer might not be sure what is happening in an Ausgang painting, but it still looks possible. Still, artfully rendered in mind-bent colors, Ausgang's new paintings are more about what reality doesn't do than what it does

BIO - Anthony Ausgang (born Anthony Charles Grant Thompson 1959) is an artist who lives and works in Los Angeles. Ausgang is a principal painter associated with the Lowbrow (art movement) one of "the first major wave of lowbrow artists" to show in Los Angeles in the early 1980s. The protagonists of his paintings are cats -- "psychedelic, wide eyed, with a mischevious look in their eyes”.
He was schooled at the Otis Art Institute in Los Angeles. In 1990, Ausgang had his first solo show at the 01 Gallery in Hollywood. Among the places he has exhibited are: The Laguna Art Museum’s “Kustom Kulture” show, Kantor Gallery, Merry Karnowsky Gallery, Roq La Rue Gallery, LA Municipal Gallery, Copro Gallery and many International venues. In 2009, Ausgang’s work was included in the exhibition Apocalypse Wow! at the Museum of Contemporary Art of Rome in Italy, and in late 2012, Ausgang was the featured international artist at the Rewind show in Bologna celebrating the 50th anniversary of Fender guitar in Italy.
As a "successful artist who appears in several magazines and exhibitions a year", Ausgang also boasts an impressive list of commercial clients including MTV, Sony Music and In 2003, Ausgang designed the cover for the British band Apollo 440. In 2010, Ausgang did the cover art for the band MGMT release Congratulations (album),"an eye grabbing illustration which was nominated by NME for the Best Art Vinyl of 2010. In 2011, Ausgang designed the Christmas windows for the La Rinascente Department Store in Milan, Italy with larger-than-life three-dimensional models of his trademark psychedelic cartoon cats.
"Vacation from Reality" is a publication of his major artworks up to 2007. His artwork is also featured in several anthologies, including Weirdo Deluxe: The Wild World of Pop Surrealism, Lowbrow Art by Matt Dukes Jordan and Pop Surrealism by Kirsten Anderson. LA Weekly magazine commissioned a painting by Ausgang for their annual "Best Of ... " special issue in 2000 for Y2K. (bio derived from Wikipedia) 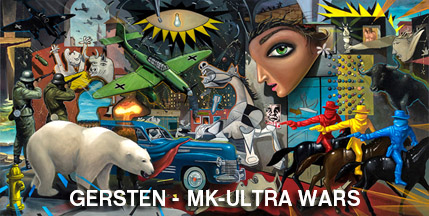 Copro Gallery presents Geoffrey Gersten's solo exhibition, MK-ULTRA Wars. Nostalgic Americana dissolves into conflict-fueled dreamscapes populated by childhood companions. Experience cheekily eerie mind control and candy coated cold war paranoia suppressed beneath the benign normalcy of everyday life. Is it a conspiracy and are you under the influence of MK-ULTRA?

Geoffrey Gersten (1986) is a painter born and residing in Arizona. He is heavily influenced by the Masters of the Dutch Golden Age. Over the past eight years, he has developed his artistic style which often combines whimsical humor and a sense of political irony painted in a classical manner.

His work can be found in myriad public and private art collections both in the United States and abroad, and has been seen in numerous galleries including Los Angeles, Las Vegas, Santa Fe, Scottsdale, Orlando, Washington DC and Taipei City.

Painting is who I am.
-- Geoffrey Gersten

Geoffrey Gersten digs to the jar of Jelly Bellies for his colors, extolling surrealist fantasy--Juxtapoz Magazine