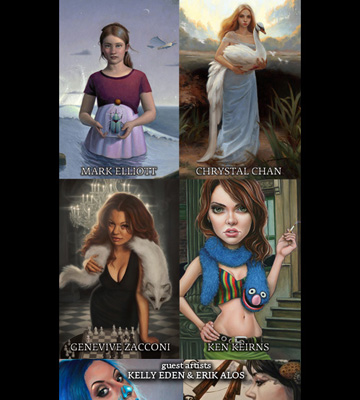 Chrystal Chan was born and raised in Northern California. Being fascinated by the spiritual world since the age of seventeen, most of her works present subjects in metaphorical situations that are derived from visions, supernatural experiences, and beings. Other works are reflective of feelings and situations placed in the everyday life. Each piece is a metaphor of the physical or supernatural universe.

Mark Elliott is a graduate of New York's School of Visual Arts and an established artist in the illustration field for more than 20 years. He has worked for all of the major publishing houses including Harper Collins, Simon and Schuster, Scholastics, Holiday House and Penguin. Mark has received a Christopher Award for his illustration in Andrew Clement's Extra Credit and has been recognized for his work in Anthony DeStefano's Little Star. His illustrations have been displayed in numerous shows and annuals as well as group and solo shows internationally. Mark's unique style is created through classical hand-painted work combined with contemporary warmth, playful realism and humor. WEB-PREVIEW

Ken Keirns is a Northern California artist who grew up in Flint, Michigan. He has always wanted to be an artist except for that short-lived Stunt Man period when he was nine. After spending nearly a decade in Chicago, Ken moved out West in late 2007 to paint full-time While his primary focus has been working with oil paint, he has been known to deliver the odd sculpture, toy prototype or mixed media piece. His recurrent subject matter revolves around cranially endowed High Brow women and monkeys interlaced with personal experiences, dreams, and the occasional bad pun. Ken's education was in graphic design and he has an incredible RESUME WEB-PREVIEW

Genevive Zacconi was born in Philadelphia in 1981. As both an artist and curator, she's been involved in numerous art exhibitions around the planet. Her delicately rendered oil paintings have been displayed at galleries including Copro Nason, La Luz De Jesus, Thinkspace, Strychnin, Perihelion Fine Arts and more. She has been featured by MSNBC, NY Press, Juxtapoz, Hi Fructose, Coagula Art Journal, and many other publications. In addition to creating her own art and freelance curation, she has also worked as painting assistant to Ron English, headed the first Philadelphia branch of "Dr. Sketchy's Anti-Art School", and was the founding director of Trinity Gallery in Philadelphia and Paul Booth's Last Rites Gallery in New York City.
WEB-PREVIEW

Erik Alos is a Los Angeles artist who has been painting for several years. His recent move to oil painting has changed his style to a more realistic and detailed look. He will be creating a few larger surreal figurative pieces for this show.

Kelly Eden What happens when the master becomes the muse? Ask Kelly Eden, an amazingly talented painter who suddenly found herself as the subject in her own life's masterpiece. With a bachelor's degree in fine arts and an unparalleled beauty, Kelly has spread her wings in the modeling world and is soaring toward living out her dreams in a world filled with art, expression, passion, and empowerment.

Kelly grew up in Colorado, with a life entrenched in art from an early age. I've lived and breathed art since I was four years old, Kelly says confidently. It is this same confidence that pushed her toward being accepted in the Denver School of the Arts, a prestigious high school in Colorado for the most talented of art students. She found a kindred spirit in the form of hyperrealism and oil painting and continued to nurture her abilities even after graduating as she earned entry into the Rocky Mountain School of Art and Design. A Dean's List student, Kelly graduated and set her sights upon the next phase of her life as a tattoo artist. One look at Kelly's phenomenal paintings would leave one scratching his or her head about why in the world she would choose to pursue anything other than that as an occupation, but all things happen for a reason.
WEB-PREVIEW
#