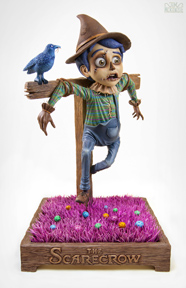 
Copro Gallery presents artist Jim McKenzie's solo exhibit 'Lost Magic'. Jim is a New York based Lowbrow / Pop Surrealist artist and animation commercial director."Lost Magic", which features a resin scarecrow sculpture with an ironic phobia of crows, will be McKenzie's debut solo art exhibit. McKenzie's other creations for "Lost Magic" include seemingly fun and playful characters such as a half-raccoon, half-unicorn appropriately named "Raccoonicorn" as well as a variety of other brightly hued animal hybrids. Despite their candy-color coating, the pieces of "Lost Magic" were crafted with a darker undertone in mind. "I wanted to showcase the intersection where beauty and sadness intertwine within. I've chosen to create contrasting hybrids and though they have these brilliant colors and seemingly majestic qualities, ultimately, they are all outcasts. This show is for those who've lost touch with the magic this world has to offer and for those who still want to see it".

ABOUT: Jim McKenzie is an American artist based in New York City. His sculptures and paintings often depict surrealist wonderlands occupied by highly saturated characters. McKenzie works as a commercial director, designer and animator at Aardman Nathan Love where he has directed commercials for clients such as National Geographic, Capital One, and H&R Block. McKenzie recently worked on the creation of Xifaxan's mascot, Gut Guy, who made his Super Bowl debut earlier this year. He is also a professor at 'The School of Visual Arts' where he received his bachelors for 3D Animation. McKenzie's artwork has been showcased in a number of galleries throughout the U.S. 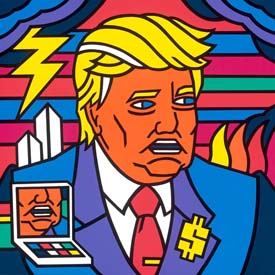 In gallery 2 The Homeless Cop (born Jason Fennell ) an artist known for his oil paintings, T-shirt designs, and various projects and animated bumps for Cartoon Network 's Adult Swim comedy block. The Homeless Cop will be present at the opening and his animations will be on view in the gallery

jason's ultra crispy oil paintings are trying to have sex with your eyes. These candy colors and bold lines live and breathe out a crazy world of monsters and men, ghosts and Gods, and this all looks really, really cool. There are battles and epic moments taking place in another dimension, where style and integrity win kingdoms. Perhaps there is a secret story, but there is a mysteriously likeable universal appeal, and the attention to detail is noticeable. Says Jason "I've always painted things I like. People, places, and things. My whole life I've been drawing and painting, and I really feel like I was born to do this. I think my work evolves in terms of subject matter, but the execution just stays true to my style. My paintings look look like a robot made them, and I get a lot of pleasure being able to say I made them with my hands. My favorite artist is Jean-Michel Basquiat, and my favorite band is Nirvana. I also like pizza."