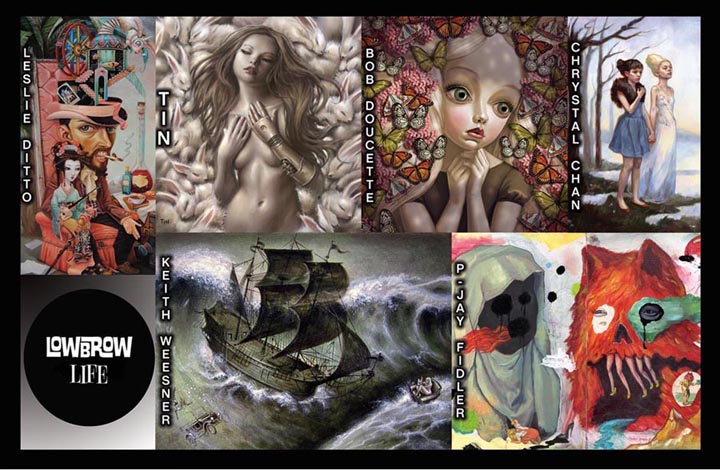 TIN - Tin's earliest influences in childhood were comic books and fantasy cartoons like "Star blazers". Says Tin "I sketched from time to time and did ok in high school art class then I decided to became a fisherman. The dangerous kind like out of the movie "Perfect Storm". I almost died three times and should have lost my drawing hand at least a dozen times. After my last close call with death I decided to become an artist. I didn't look at art as a career though until I was 22".

His main influences are Steam punk, a subgenre of fantasy and speculative fiction that came into prominence in the 1980s. The term denotes works set in an era or world where steam power is still widely used—usually the 19th century, and often set in Victorian era England—but with prominent elements of either science fiction or fantasy, such as fictional technological inventions like those found in the works of H. G. Wells and Jules Verne.

KEITH WEESNER - Keith Weesner is a painter and illustrator whose work reflects his
obsession with car culture, vampy women, cinematic settings and brooding characters. Keith studied automotive design at Art Center in Pasadena, but was pretty much born drawing. He is inspired by
golden age illustrators like N.C. Wyeth and Andrew Loomis, and 20th century painters like Sargent and Hopper. His brush inking style sprang from Rex Burnett, Wally Wood, Ed Newton and Robert Williams' Inking styles. His ink designs for hot rod T shirts have become iconic in the hot rod
community.

Keith worked in animation doing background designs for 13 years mostly at Warner Brothers on Bruce Timm's Batman, Superman, Batman Beyond and Justice League shows. He was also instrumental in the Batman Mask of the Phantasm and Return of the Joker features, as well as the Power Puff Girls feature for Cartoon Network, and Gary Baseman's Teacher's Pet at Disney. The last four years he has been dedicated to at least two solo gallery shows a year at Copro Gallery and Outre gallery in Australia.

LESLIE DITTO - As far back as she can remember, Leslie has always been drawn to self expression through visual arts. "As a young girl, growing up in Memphis, Tennessee, I was not exposed to any classical surreal artist until I attended Overton High School for the performing and Visual Arts. Before that I was raised around an "old school" Harley Davidson shop that my father and his brother owned.I spent many summers helping my father there at the shop and watching him build Harley motorcycles from the ground up and then painted the gas tanks ( and anything else he could find on the motorcycle) with fantasy images that were inspired by such artist as Franzetta and Boris Valleo. I then became fascinated with the beautiful, powerful and sexy women that these artist created."

I was accepted into Otis Parsons in Los Angeles. After only two month of training my father had become terminally ill and I was forced to return home to Memphis. I was never able to return to school but could not deny the artist in me the opportunity for expression just because I had never been formally trained.

Over the years I researched techniques of the “Old Masters” such as Leonardo DA Vinci, Rubens, Raphael, and Rembrandt .I fell in love with the technique of glazing transparent oil color over a neutral colored under painting. With strong influences from fantasy artist, surreal artist, and the "Old Masters", I create disturbingly beautiful oil paintings that interpret to the viewer my deep emotions that are conceived from my views of current social, political, and religious dynamics. My ideas come to me in an organic fashion. Starting with a seed of a simple idea and growing into many complex symbols and images. My main goal is to capture my audience and bring them to my emotional state in the hopes that my test for an echo will be a success.

P-JAY FIDLER - P-Jay Fidlers art is a non linear narrative unfolding onto canvas. The viewer is as important to the story as the painting itself. Because his audience brings with them a major part of the story, the results are often surreal, ambiguous, and yet very much familiar. His work reflects a mixture of adolescent archetypes with dark psychological aspects of the human condition. These images,
juxtaposed against a silent landscapes, combine to create a piece of art work that is truly awe inspiring and thought provoking, while leaving the audience with more insight and questions about
the work as well as themselves.

Studying illustration at Art Center College of Design, Fidler learned to tell stories effectively through imagery. Raised in a small farm community in central California, he was very influenced by his
childhood surroundings. With animal imagery, landscapes, religious iconography, combined with his love of Flemish paintings, vintage children's books and contemporary graphic design, he creates a non-linear storyline of Life, Love, Sex and Death that is disturbing yet beautiful.

CHRYSTAL CHAN - Chrystal Y Chan was born in November 1984 and raised in the Bay Area, California. Being fascinated by the spiritual world since the age of seventeen, most of her works present subjects in metaphorical situations that are derived from visions, supernatural experiences, and beings. Other works are reflective of feelings and situations placed in the everyday life. Each piece states facts of the physical or the supernatural.