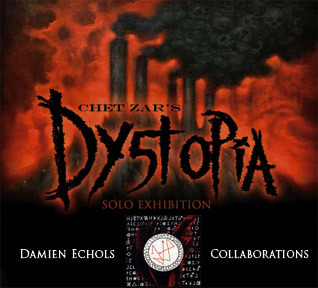 Copro Gallery presents Chet Zar's DY5TOPIA! A Dark Universe, evidenced by his paintings, where monsters are depicted in states of confusion, fear and suffering. DY5TOPIA appears post-appocalyptic, industrial and foreboding, the skies at times stained the color of blood, smokestacks jutting from the mountainous wastelands belching out murky black death.

The DY5TOPIA EVENT, discussed in Zar's Kickstarter pitch video , has endeavored to transform Copro Gallery into his Dark Universe: DY5TOPIA! The exterior of the gallery boasts a full street scene from DY5TOPIA, including industrial wall facades, smokestacks, leaking pipes, a mausoleum and many other suprises!

In addition to Chet Zar's DY5TOPIA paintings, the interior of the gallery will be similarly transformed, with live-action appearances by Zar's characters: Black Magick and Interloper! In the spirit of the autumn sesaon and Dy5topia Dark Universe everyone attending will be invited to dress as a Chet Zar monster, or any monstrous being of choice. Placards will also be placed throughout the gallery, with excerpts from  DY5TOPIA: A Field Guide to the Dark Universe of Chet Zar  (currently in production) ,  guiding you through the experience!

This will certainly be Zar's most awe inspiring and interactive solo show to date, and a futuristic glimpse into  DY5TOPIA: A Field Guide to the Dark Universe of Chet Zar

Damien Echols art work consists of glyphs, sigils and symbols designed to bypass the conscious mind and speak directly to the subconscious. In addition to new solo work, Damien will also be showing works he collaborated on with several other artists, including his wife Lorri Davis. The collaboration process is an exploration in combining the energy of Damien's approach to traditional ceremonial magick with the contemporary techniques of his fellow artists, friends, and loved ones. Lorri Davis Erica Flannes David Stoupakis Menton 3 Chet Zar Craig LaRotonda Vincent Castiglia Jessicka Addams Mike Bellamy Adam Hays Derek Martinez Vinny Romanelli

About Damien Echols
Damien Echols is an artist and New York Times bestselling author. He has been a practitioner of ceremonial Magick for over 20 years and leads classes on Magick and tarot readings. He spent over 18 years on death row in Arkansas for a crime he didn't commit before gaining his freedom in 2011. Several documenteries were made by HBO documenting his plight. Damien uses a combination of traditional ceremonial Magick techniques combined with his own alphabet/code to break down concepts and scenarios into abstract designs.