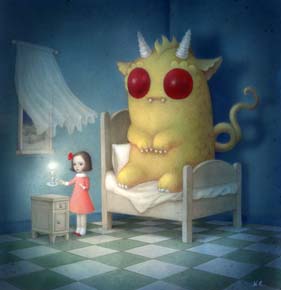 Nicoletta Ceccoli, My Puppy is Scared

Copro Gallery presents the 2017 BLAB! SHOW group art exhibition. This will be the 12th ANNUAL BLAB SHOW exhibition with Copro Gallery curated by Monte Beauchamp.Special Guest Author Emil Ferris will be in attendance signing her new book 'My Favorite Things is Monsters' on her First North American Exhibition of Original art.

Monte Beauchamp is an awarding-winning art director whose books have been featured in Vanity Fair, The New York Times, The Onion, The Believer, Flaunt, Bizarre, Graphis, Print, and ForeWard magazine, among others. His titles include Krampus: The Devil of Christmas (Last Gasp), The Life and Times of R. Crumb (St. Martin’s Press), and Striking Images: Vintage Match Cover Art (Chronicle), New & Used BLAB! (Chronicle). He is currently working on a book for Simon & Schuster.

This exhibition will feature a select cache of original drawings by Emil Ferris from her fictional graphic diary, My Favorite Things is Monsters.
On April 4, 2017 Deadline Hollywood reported that director Sam Mendes (American Beauty) is in early talks for My Favorite Thing Is Monsters.
“…her mastery of comics, her pyrotechnic drawings, and her nested narratives are already placing her among the greatest practitioners of the form.”
—The New Yorker, February 10. 2017
My Favorite Thing Is Monsters is A Dazzling, Graphic Novel Tour-De-Force
—NPR Books, February 22, 2017

Charlie Immer has created 5 pieces for the show. "In this series, 'FLUID', I wanted to continue the exploration of the line between grotesque and pleasant.  I'm very interested in how innocuous things can become disturbing and vice-versa, like the bloody neck stump in front of a sliced watermelon"


REVIEW OF THE FIRST BLAB! SHOW 2005 In this climate of consumer pollution and corporate framework, it is no small feat when an act of creative freedom rears its pretty head. So when something comes along that is completely unrestrained and devoid of commercial influences it is time for applause. And BLAB! magazine is one of the platforms for unharnessed art that deserves a standing ovation. Started in 1986 and now in its 16th edition, BLAB! is the brainchild of founder, art director, and designer Monte Beauchamp. A magazine/art book in appearance, but without a strict editorial voice or advertising of any kind, it's more of an unconventional medium through which select artists have the freedom to create and express whatever they want across a chunk of pages. BLAB! started out heavy on comics but has expanded to include paintings and other works by countless outsider and fine artists. THE BLAB! SHOW, presented by Copro/Nason Gallery, features original artwork selections from the BLAB! anthologies, including pieces by Gary Baseman, Tim Biskup, Drew Friedman, David Sandlin, Owen Smith, Gary Taxali, Esther Pearl Watson, and more. It's the first group show for the magazine, and if the growth of this refreshing visual platform is any barometer, it won't be the last.
Juxtapoz, 2005